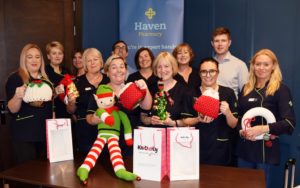 Beaumont Hospital Foundation, the charity which works to encourage private donations to one of Ireland’s largest and busiest public hospitals, launched the Knitivity campaign in October 2018. Knitivity invites people countrywide to knit one, or all, of its festive knitting projects – which include patterns for both the experienced and the novice knitter – and sell them locally or return them for sale to the hospital or through any Haven Pharmacy. The completed knits were sold in attractive branded gift bags, accompanied by a card identifying the name and county of origin of the knitter to acknowledge and personalise their contribution. 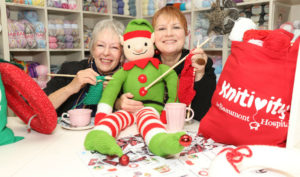 Initially, the campaign was rolled out in Beaumont Hospital, however after an unprecedented response from the public, it was evident that there was an opportunity for the Foundation to expand the campaign’s reach throughout the country. Sophie Hart Haven Ambassador for Haven Pharmacy Doherty’s in Beaumont spear headed the campaign and suggested that the wider Haven Pharmacy group across Ireland could get involved. “We exceeded expectations this year. Our customers across the country have been so generous with their time and money. We’re absolutely thrilled to announce we raised €9,325 for the Beaumont Hospital Foundation.” commented Keith Brennan, Chairman, Haven Pharmacy

Beaumont Hospital provide emergency and acute care services across 54 medical specialties. It is also a Designated Cancer Centre and the Regional Treatment Centre for Ear, Nose and Throat, and Gastroenterology. It is the National Referral Centre for Neurosurgery and Neurology, Renal Transplantation, and Cochlear Implantation. Fundraising and Communications Manager for Beaumont Hospital Foundation, Sheila Campbell, explains why this money is pivotal for Beaumont Hospital, “This money will go to fund vital services and equipment which is needed to help our nursing and medical staff to save lives here in the hospital. Outside of Government funding there is still a great need for funding for equipment that doesn’t come under the budget. The fundraising that Beaumont Hospital Foundation undertakes on behalf of the hospital allows them to say ‘yes’ to some of the requests from medical teams and departments across the hospital who are looking for funding for services that are needed for them to do their jobs safely and also to be able to provide improved care for the patients of Beaumont Hospital” 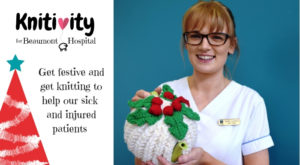 Haven Pharmacy would like to thank everyone who got involved in this campaign and to encourage anyone who would like to sign up for this years Knitivity campaign to e-mail denise.carroll@havenpharmacy.ie, but if you can’t wait until then – Spring patterns are available now at www.beaumontfundraising.ie/knitivity