On Thursday 15th March, Haven Pharmacy and the Beaumont Hospital Foundation came together to thank everyone who got involved in last year’s Christmas ‘Knitivity’ campaign and to announce the total amount of money raised through Haven Pharmacy’s participation.

This campaign called on people from all over Ireland to knit or crochet a Christmas character which would then be sold on behalf of the Beaumont Hospital Foundation in Haven Pharmacy’s. Initially, the campaign was rolled out in Beaumont Hospital. However, after an unprecedented response from the public, it was evident that there was an opportunity for the Foundation to expand the campaign’s reach throughout the country.

Sophie Hart (pictured above), Haven Ambassador for Haven Pharmacy Doherty’s in Beaumont suggested that the wider Haven Pharmacy group, which consists of 54 pharmacies across Ireland could get involved.

Each knitted character came with a tag, detailing who made the character, where they were from and why they wanted to support the Beaumont Hospital Foundation. This added to the uniqueness of the characters and reminded people of why it was so important to support the campaign. 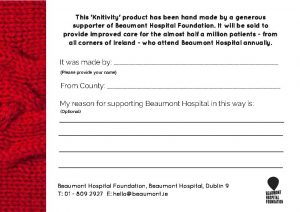 A Big ‘Thank You’

Haven Pharmacy released a video to explain a little bit about the campaign, to thank those who got involved and to announce that €9700 has been raised through their participation.

“The take-up was excellent. People across the country were so generous with their time and we estimate that approximately 650 characters were knit and sold through Haven Pharmacy’s involvement. We’re delighted to say that we raised €9700 for the Beaumont Hospital Foundation.”

“What was lovely about this campaign, was that it encouraged people all over the country to pick up a hobby that many left behind years ago. The phones were abandoned, the dust was blown off the knitting needles and people came together to do something kind for an extremely worthy cause. The campaign really gathered momentum in the run up to Christmas last year, with all Haven pharmacies selling out of the characters, so we’re confident that it will do even better this year.”

Beaumont Hospital is a large academic teaching hospital 5km north of Dublin City centre. They provide emergency and acute care services across 54 medical specialties. It is also a Designated Cancer Centre and the Regional Treatment Centre for Ear, Nose and Throat, and Gastroenterology. It is the National Referral Centre for Neurosurgery and Neurology, Renal Transplantation, and Cochlear Implantation.

“This money will go to fund vital services and equipment which is needed to help our nursing and medical staff to save lives here in the hospital.”

“Outside of Government funding there is still a great need for funding for equipment that doesn’t come under the budget. The fundraising that Beaumont Hospital Foundation undertakes on behalf of the hospital allows them to say ‘yes’ to some of the requests from medical teams and departments across the hospital who are looking for funding for services that are needed for them to do their jobs safely and also to be able to provide improved care for the patients of Beaumont Hospital”

Haven Pharmacy would like to thank everyone who got involved in this campaign and to encourage anyone who would like to sign up for this years Knitivity campaign to e-mail siobhan.smith@indepharm.ie

Care in the Community – Men’s Sheds
Scroll to top